Not since the great days of Muhammad Ali and Joe Frazier had their been a greater heavyweight rivalry than that of Evander Holyfield and Riddick Bowe. The pair first met in 1992 when Holyfield was the undisputed heavyweight champion of the world. Holyfield had de-throned the very temperamental, yet Tyson-destroying Buster Douglas and few believed Evander was any more than just a blown-up cruiserweight. His performance against the much bigger, heavier and undefeated Bowe put all doubt to rest.

Tyson was out of the picture at this time serving a 6-year prison sentence and the heavyweight division was crying out for a new king. The heavyweight division was about to enter a true golden era, dominated by Holyfield, Bowe, Lennox Lewis and Tyson for a short time after his release. Since this time its been all about the Klitschko’s. Nobody’s been good enough to beat them for far too long.

Holyfield v Bowe 1, 2 and 3 are all here in full for you to watch and enjoy. Amazingly these two guys were actually good friends and visited each others houses to celebrate Birthdays! Bowe is a real favourite of ours. Its a shame that most people remember him for choosing not to fight Lewis. That awful footage of him throwing the WBC belt in the bin really sticks in people’s memories. 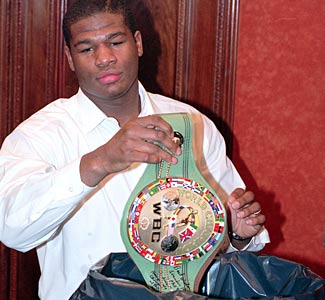 We forgive you Riddick. A great fighter and a true champion.

Sorry for holding you up ! Please click here to visit the Holyfield v Bowe Trilogy Page For Members >

Sorry, no Tweets were found.


Warning: Invalid argument supplied for foreach() in /nfs/c05/h02/mnt/73137/domains/sports-media.info/html/wp-content/plugins/kebo-twitter-feed/inc/get_tweets.php on line 257